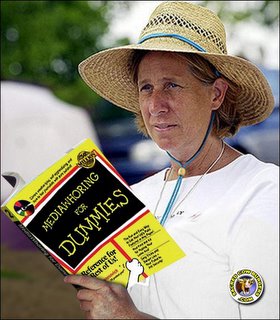 Dear Cindy:
My parents don't really pay attention to me. One of my brothers wants me to die (seriously, he even told my parents that), another brother is too occupied to talk to me, and the third one is in the war for oil that's been going on since 9-11. My older brother hurts me a lot. My life sucks, and I write my own songs and they are about misery and pain. I am in the 7th grade and 13, what should I do to have a better family relationship?
Miserable in Montana

Dear Miserable:
I think the first thing you need is a dose of gratitude, you whiny little brat. At least your brothers are still alive to abuse you. My children lost their brother Casey. They would give their spleens to feel even the murderous hatred of an older brother again.

But the most concerning thing I see in your letter is that you know one of your brothers told your parents that he wanted you dead. How do you know this? Are you illegally wire-tapping? If so, I want you dead too.

And, by the way, the "war for oil" was going on long before 9-11. In fact, it dates back to the founding of this heinous country. That was not tea that was dumped into Boston Harbor, missy. Nope, that was Grade A Iraqi crude, stolen by George Washington from the colonial Iraqis with the help of the colonial Zionists. Look it up.

But back to your question-- what should you do to have a better family relationship? I might be going out on a limb, here, but, how about...hmm...GETTING THE HELL OUT OF THERE? I don't need a freaking crystal ball to see you chained to the basement furnace real soon, with mom and dad bringing you microwaved cat food and telling everyone that you've gone to live with your Aunt Gertrude in Syracuse. That's if your folks still find you amusing. If they don't, well, uh-- they haven't recently bought a wood-chipper, have they?
_________________________________

Dear Cindy:
My office recently hired a new employee. He is a 'vegan'. The problem is he is passing gas constantly. I don't know if he's got some medical problem that causes him to have no control of his flatulence. You can tell where he's been in the building because of the smell. I'm to the point that it's making me mad when he comes into my office and leaves it smelling, but I don't want to hang up 'no farting' signs until I know it isn't a disability. Also, I'm not the only one who has noticed this. I feel kind of sorry for the guy, but if he's just rude I'd like to put a stop to it.
Reeling in Reno

Dear Reno:
Ever slept in a tent for a month, in 100 degree heat, with a bunch of unshowered vegans?

I didn't think so.

Dear Cindy:
My frog swallowed a large marble, what should I do? Should I try to make him spit it out? Can he pass it since he swallowed it?
Frog Friend in Fresno

Dear Frog Friend:
When I was in Venezuela, Hugo Chavez told me I was the most beautiful woman he had ever laid eyes on. He called me Evita, which made my travel companion Julie quite angry.

As for your frog, here's what I'd like you to do. Gently massage the frog's stomach, while talking soothingly to him (maybe, "froggie, froggie, froggie," or something like that). Then, when he's relaxed, plunge a pen knife into his gut and remove the marble. Before he dies, show him the marble, and whisper in his little frog ear, "this is what happens when we take what is not ours."

Hope that helps.
Posted by Unknown at 4:37 AM