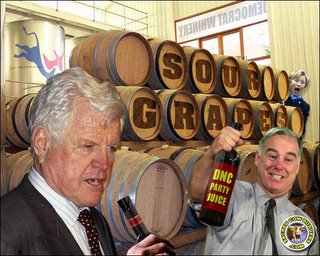 TedBarring a miracle, Samuel Alito will be confirmed to the Supreme Court of the United States this Tuesday. Roe v. Wade will be repealed, and the clock will effectively be turned back 50 years to a time when women were herded like cattle into back alley abortion clinics and beaten with the King James Bible until they miscarried. Affirmative Action will be scrapped. Blacks will be thrown back into chains. Cub Scouts will go from door to door, spreading their message of hate and intolerance. There will be a bug in every telephone, a nativity scene in every park, and a heterosexual in every Showtime drama series. Dr. King's dream of justice and equality will succomb to George Bush’s Great American Nightmare.

I’ve tried pleading with congressional Republicans. I’ve tried threatening them with a filibuster. I’ve even tried rolling around on the floor of the Senate until I got my way. Unfortunately, the close-minded conservatives who control Congress will simply not respond to reason. Therefore, I have no choice but to appeal to their primitive, apelike instinct for protecting the lives of children over the rights of the mother.

For every vote cast this Tuesday in favor of confirming Judge Alito, I, Senator Edward Kennedy, will eat one small child.

I’m sorry it has come to this, but desperate times call for drastic measures. The children have already been picked at random from elementary and middle school rosters across the country, and the smorgasbord will commence promptly after Tuesday’s vote. Unless senate Republicans join Democrats in their courageous stand against Alito’s confirmation, I’ll be having little Lindsay Allen of Portsmouth, New Hampshire glazed with a light Bernaise sauce and garnished with fresh parsley for dinner that very evening. Wednesday’s breakfast menu will include a Denver-style omelette prepared with Colorado fifth-grader Jeremy Stevens, and for lunch I’ll be flying to Pennsylvania for a Philly Cheese Steak ala Christy Caldwell. Young Kyoshi Matsuri of San Francisco, I have a gallon of wasabi with your name on it for Thursday, and then it’s off to Hawaii for an Alana Hokuikekai luau.

I assure you that I take no pleasure from performing this terrible task. I have several wonderful grandchildren whom I love dearly, but I wouldn’t hesitate to toss ‘em into the deep fryer and serve them up with a side of coleslaw to protect a woman’s right to choose. Thankfully, none of their names were drawn, but I might do it anyway just to prove I mean business. When Clarence Thomas was confirmed in 1991, I ate an entire girl’s softball team. Ever try to pass a catcher’s mitt through your colon? It’s not a pretty picture, but it illustrates the lengths I will go to save our democracy from raving extremists like Samuel Alito.

If the Taliban-wing of the Republican Party is as “pro-life” as they claim to be, then they will vote their conscience this Tuesday. If not, they’ll have no one to blame for little Tina Draper of Portland, Oregon’s flambé fate but themselves.

Thank you for your time, and thank you, Dickybird, for the opportunity to use your little corner of the Blogodome as a venue for this important message.
Posted by Unknown at 4:16 AM