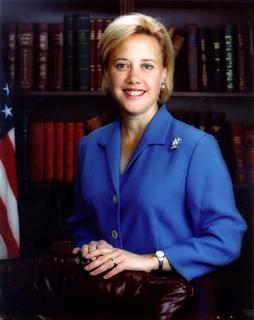 Today's loser hails from the state that received the least amount of damage from Hurricane Katrina yet you would think that it was the only state hit.

Mary Landrieu (Dumbass-LA) has recently garnered National attention by threatening the President of the United States. This being the only thing that she has accomplished since she was voted out of Louisiana. "Her" website HERE.

Mary was elected to her first term in 1996 at a time when Republicans were being slaughtered in the streets in Louisiana by desperate Democrats. She was re-elected in 2002 when she ran on the platform of an Escalade in every driveway in New Orleans. Surprisingly enough only seventeen votes were cast in her Senate election and ALL were for her. That is odd coming from the loins of a former New Orleans mayor and U.S. Secretary of Housing and Urban Development, Moon Landrieu, her DAD.

Since Mary has never had an iota of impact on the Senate or government in general, it is assumed that she is just there because no one wants her in Louisiana. Mary's committee asignments include Appropriations where she makes the coffee, which everyone complains about and she also serves on the District of Columbia Subcommittee where she is tasked with making DC's school system into the worst in the entire industrialized world. So far she has been a smashing success at that.

Since 1999, Mary has served on the Senate Armed Forces Committee where she is tasked with picking out the pillows for each Senator's chair. Most of them admit that she is less than talented at this important position. On to Part Two.

She was elected to the Louisiana House of Representatives when she was just twenty-three years old. Who in their right mind would elect a twenty-three year old dumbass? I remember when I was that age and I wouldn't have voted for myself then. Anyway, she was elected and has never had to accomplish another thing. Please folks, don't make this a habit. Otherwise, your levee might break and everyone's stuff gets ruined. Oh, that's right, Mary lives ABOVE Pontchartrain, imagine that.

Mary is married to an attorney from Monroe named Frank Snellings. They have two kids, Connor and Mary Shannon who attend an exclusive private school in DC. This is ironic in itself since Mary makes policy concerning the public school system in the area.

The best thing that I found on "Mary's" site was the link to her staff. Forty total. I know that every Senator has a staff this large or larger, but do you have to rub my nose in it? Why in the holy Hell would a Senator need a staff of forty? This is completely outta hand.

Mary, there was a time when I considered Barbara Boxer the dumbest Senator (of the female persuasion) but alas I'm now torn. Okay----Boxer is sitll the dumbest but you are gaining.
Posted by Unknown at 5:20 AM